If you’ve never been there I understand. Till today I was not ready to explore the magical yet dangerous world of unmanaged library access from managed code. I can only suppouse that you selected to read this on purpose so prepare to be brain-raped.

Since the beginning of C++ sideloading unmanaged libraries and unmanaged invocation was expected. We’ve used some system dll here and some OS window API from another dll. But since I remember .NET was mostly free of that. I have never used or even needed using platform invoke in any task.

“Platform Invoke (or P/Invoke) is a technology that you to access structs, callbacks, and functions in unmanaged libraries from your managed code.” Docs What that means is you can load any dll, define static extern definition of function or structure and then invoke like it was a managed resource.

What if after couple years you’d like to change your system version or even use a more core image of e.g. Windows? You deploy your application and all seems to function well. But this one invocation causes that mystical System.DllNotFoundException: Unable to load DLL (HRESULT: 0x8007007E). You check if specified dependency is available as dll and you find correct file in correct place.

What exactly is given HRESULT? I’ve tried to find a reason but most of the answers were misleading e.g. this thread. One of the answers suggested that there may be a certain dependency of native dll missing. In that case DllNotFoundException is clearly valid even if it does not state which one is missing.

I’ve used Dependency Walker to display all the dependencies of a native library and sure enough there was a certain .ocx file that was not on the new hosting OS. OCX is a file extension used by ActiveX forms that are clearly not required for lightweight server OS image. 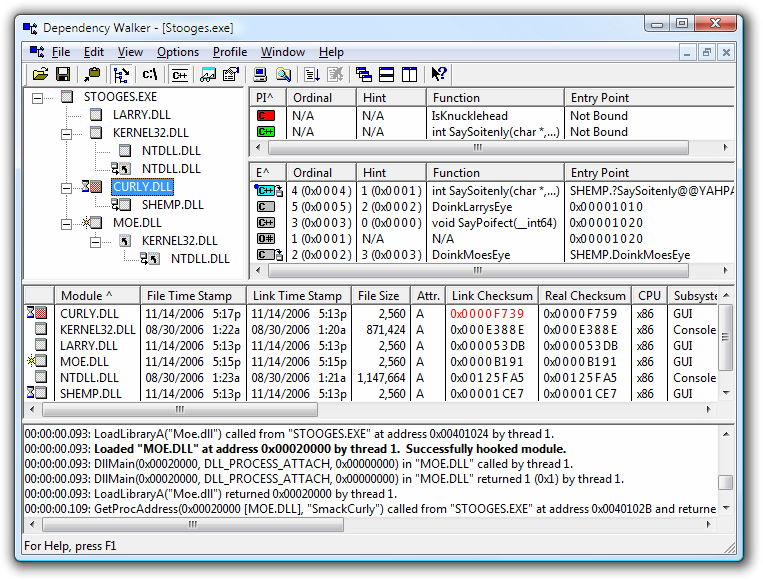 Providing missing dependency as a binary file is not an option when it comes to ActiveX control files. They must be registered correctly via Microsoft Register Server (regsvr32.exe) to be fully functional. After registering it with default x64 registry server and redeploying I’ve ended up with BadImageException but a by using correct x86 server application loaded dependency and invoked native methods correctly.

You have survived! Keep in mind that: